OUR PRESIDENT OF THE UNITED STATES OF AMERICA 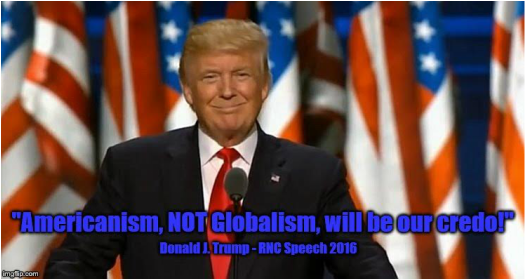 GET TO KNOW THIS DONALD TRUMP

Watch the video below going back from 1980-2017.. This is the Donald I remembered in that video.  Very sincere, no hidden agenda.  Just someone who was very concerned.

Here is a man, who saw our country in trouble for decades, and he knew that someone had to step up. But who else outside of political office was going to do this, and really fight for our nation?

​ That is what I have been seeing in Trump.  He is risking everything to fight for our country.

Hillary wanted everyone to believe, that we can't survive without her and Obama. But the truth is, that unless you believe how incredibly corrupt our government has been, then how can you really discern, if you don't investigate the truth yourself?

That is why, the movie Hillary's America is a real eye opener and educational. You will find out what our government has been hiding all along and why there is a long history of real investigation that is going on right now, that is unbelievably mind blowing.

In this video below, you can make a real determination and ask yourself, does Trump have anything to hide? He never served in political office. But, he does have insights that we should really hear what he has to say.. He comes across honest to me, inspite of how he comes across in his personality.. He's not perfect, but perfectly flawed that God has been using to shake up our nation..

All I know, that this is not a personality contest and people need to wake up to the facts that our country has been spiraling out of control, and it is not going to get better, if we're stuck with the same corrupt government.

I believe that Trump has the kind of courage to stand up against the corruption of our government that we need, like Gideon from the book of Judges 7... It is about time that someone is doing something about it! I don't want to go another round of our corrupt government running our country to the ground. Please take this serious. This is your last chance to make a difference in our country, by realizing that it is time for a change.  I believe that Trump has what it takes to make that difference.
​
Please watch Hillary's America, so you can know the history of the democratic party, and see what America has become today.  After you see that video, then make your decision to what you truly believe in your heart who God wants you to vote for.
HILLARY'S AMERICA
May you all be encouraged to get ready to stand up for our country! This Land is our Land! Don't let the corrupt government destroy what God intended for us to have, by handing over the power to the enemy.. Didn't God had His people fight for their land? The Promise Land? Does anyone remember the fall of Jericho? God got His people to March around the city for 7 days, and when it was time, everyone had to make a loud sound to blast the TRUMPET to win the war.

Find out how God made that happen, should bring a smile to your face > www.biblegateway.com/passage/?search=Joshua%206
VERY POWERFUL VIDEO BELOW.. PLEASE READ MY MESSAGE, AS THE LORD PUT THIS IN ME TO WRITE.

I NEVER THOUGHT I WOULD EVER VOTE FOR TRUMP. BUT I KNEW THAT GOD WAS USING HIM TO SHAKE UP OUR NATION FOR THE LONGEST TIME.. MEANING, THAT IT IS REALLY GOD SHAKING UP OUR NATION, AND HE WILL USE ANYONE AS HE SEES FIT TO DO IT.

IT WAS TO MY SURPRISE THAT GOD WOKE ME UP AND TOLD ME WHAT TO DO. THAT WAS TO PAY ATTENTION, AND SEEK ANSWERS, AS HE TOLD ME TO SEEK FIRST THE KINGDOM OF GOD, AND EVERYTHING ELSE WILL FALL INTO PLACE. SURE ENOUGH, THAT IS EXACTLY WHAT HAS BEEN HAPPENING.

I PRAY FOR ALL OF GOD'S CHILDREN TO RISE UP, DON'T GIVE UP, BECAUSE GOD HAS A PLAN FOR OUR NATION, AND THE TRUE BATTLE BELONGS TO HIM.. IF YOU NEED TO UNDERSTAND THE WILL OF GOD, READ THE BOOK OF DANIEL, AND SEE HOW GOD RISE UP KINGS AND BRING DOWN KINGS.. THIS ELECTION DOES MATTER TO GOD, AND HE SAYS TO HIS PEOPLE TO NOT FEAR.. IT IS TIME TO STAND UP AGAINST THE CORRUPT GOVERNMENT! IT IS TIME FOR A CHANGE!

BUT EVEN IF YOU SHOULD SUFFER FOR RIGHTEOUSNESS’ SAKE,
YOU WILL BE BLESSED. HAVE NO FEAR OF THEM, NOR BE TROUBLED,
1 PETER 3:14

HAVE I NOT COMMANDED YOU? BE STRONG AND COURAGEOUS. DO NOT BE FRIGHTENED,
​AND DO NOT BE DISMAYED, FOR THE LORD YOUR GOD IS WITH YOU WHEREVER YOU GO.”
JOSHUA 1:9
There are more work to be done. Still under construction. Hope to see you around. Thank you for visiting Nilda4Jesus ツ God bless you.